Are you a bad enough dude? If you were like me and grew up on the playgrounds in the late 80’s/early 90’s, you were probably asked that question at one point or another. Not sure where that question came from? Well….

The game is Bad Dudes for the NES. It’s a port of an arcade game called Bad Dudes vs. Dragon Ninja, and it was a fun one or two-player beat-em up that could be unfair at times, but never made me throw my controller as a kid.

My brother and I played through Bad Dudes over the course of a weekend rental,  utilizing turbo buttons and a cheat code for additional lives (we were kids and the game was hard!).

Fun fact: One of my all-time favorite NES games,  Karnov, was represented in Bad Dudes. Its main character, also named Karnov, was the boss at the end of the first stage. An ex-circus strongman, Karnov somehow got himself involved in kidnapping the American President. Oh, and Karnov is Russian.

Anyhoo. Karnov is not difficult to wreck. His main attacks involve doing a sort of karate chop, and breathing fire from his mouth (circus represent!).

Jumping up to the fence line and down to the pavement, will help you easily avoid Karnov’s PUNISHING attacks. Hit him in the face until his life meter hits zero.

And then, victory is yours! Until Stage 2. Take what you can get, OK? Until I write again….

My love for Metroid-style games is endless. And when I saw the first screenshot of Axiom Verge back in 2014, I knew we were meant to be together. FOREVER.

The world is massive, filled to the brim with secrets for you to discover. Backtracking is a must in this style of game, but it becomes more and more rewarding the further you progress. Countless weapons, upgrades, and tools are meant to be found as you gradually enhance your abilities, and learn the mechanics of the game.

Axiom Verge’s graphics and sound will take you back to those Saturday mornings glued to your television, NES controller in hand. Although inspired by the NES in style, modern touches to visuals and music, help make the game more accessible for today’s gamer. The graphics stand out in particular to me, with some inspiration drawn from Geiger, while maintaining their own feel/style.

The only downside to Axiom Verge is the sheer density of each area. With so many tools at your disposal, it can grow tiring testing each one to see if it will reveal a secret, or allow you access to an area not visible on the map. For Metroid veterans like myself, this isn’t necessarily a bad thing, but when most modern games provide a lot of hand holding, not knowing where to go next without a lot of trial and error, may turn off some folks. IT DOES NOT RUIN THE GAME!

Honestly, if you haven’t, go buy this game and play it (available on all major consoles/handhelds). Whether you finish it or not, enjoy the aesthetics, the creativity, and the reminder of a time when the most important thing was waking up as early as possible to play your NES until your thumbs stopped working.

Until I write again…. 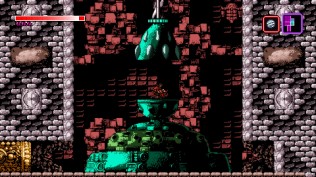 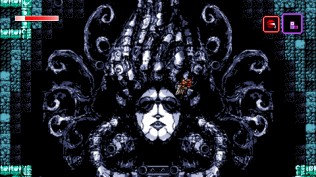 Life got a little busy, but I am back to my mostly-normal schedule of taking you back to the past and propelling you into the future. So, let’s kick things off with a few screenshots from Final Fantasy XIV: A Realm Reborn–Square-Enix’s Final Fantasy MMO.

I spent quite a bit of time with World of Warcraft. No lie there. But, after  a while it got a little ho-hum. I’ll definitely return, especially with Legion providing a lot of regular content, but I really need something a little different. Enter: A Realm Reborn.

The story feels very  Final Fantasy-ish–which  is great. I love the series, and some of the throwbacks and name drops really gets my nostalgia heart pumping. The battle system, graphics, and music are also top notch.

On a later date I will get more in-depth to what makes FFXIV a great experience. So for now–enjoy these hand-picked pics!

Until I write again! 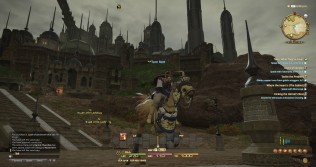 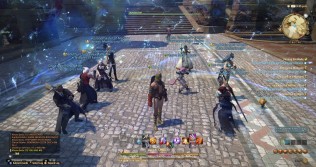 When your daughter Jessica is kidnapped by the ruthless Mad Gear gang, it is up to you, Mayor Mike Haggar, along with friends Cody and Guy, to rescue her. You will bring the pain to the streets of Metro City in search of Jessica over the course of six stages and two bonus stages.

After you finish off the boss of the second stage, it’s time to finally hit the Mad Gears where it hurts the most: THEIR CAR.

The first of two bonus stages consists of you beating the hell out of a Mad Gear gang member’s car with your punches, kicks and a steel pipe. Can you feel the anger flowing through you? Good! GOOD!

There are several points on the car to hit with your destruction. Windows. Doors. Hood. Nothing is safe. Start on the left side of the screen, and after introducing your pipe to the car a few times, it’s time to jump to the right side and continue your reign of terror.

When the dust settles, and you have thoroughly man-handled the vehicle, leaving it a sad wreck, the owner of the car comes out, drops to his knees and cries, “Oh! My God.” However, thanks to Nintendo’s fear of religion during the 80’s and 90’s, that statement was changed to, “Oh! My car” for the SNES port. Either way–that car is done.

Final Fight is a fantastic beat-em up that still holds up after all these years. Find a way to play it and feel the power of that steel pipe!

Wish you were here!

For Honor is in open beta this weekend, prior to its Feb 14th release, and I had the chance to put in a couple hours and check it out on XBONE. It’s a PVP-oriented, combat-heavy game, with a system akin to Dark Souls. You have 9 heroes to choose from  each representing one of three clans (Knight, Viking and Samurai). And each with their own specs and perks. After every match, you receive experience and loot to apply for your chosen hero. As you level up, you unlock new perks to use during matches, while the  loot enables cosmetic customization to your equipment (helmet, chest, weapon, etc.) along with adjustments to your specs.

Several modes are available such as Dominion, Duel and Deathmatch, allowing you to play with/against human opponents and/or AI bots. I focused on Dominion, which emphasized holding positions on a map to gain points while slicing through your opponents and their army.

As i mentioned, the combat is similar to Dark Souls, in that it’s slower, more methodical, with an emphasis on maintaining your stamina, blocking and patiently waiting for an opening to attack. You can control the direction of your attack and block with the right control stick, making combat something to think about, as your opponent can do the same thing.

The game looks, sounds, and plays great, with the only technical hiccup occurring when a human player dropped out of a match and was replaced with an AI bot. The game would pause for a few seconds while the change was made. This did disrupt the action, but did not ruin the overall experience.

Some patience is required, though, between matches, as load times take forever…. 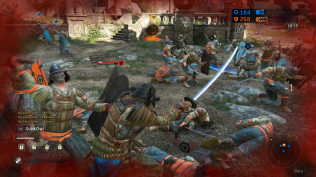 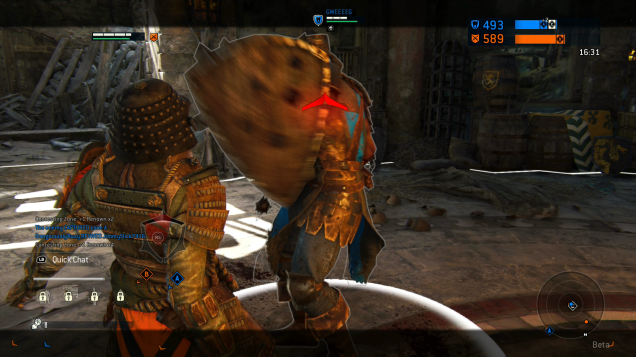 When it came to action, Contra on the NES was a 10. However, Contra 3 on the SNES turned it up to 11. Stereo sound that rocked your speakers. Explosions that rocked your brain. A crazy “platforming” section that had you grabbing onto missiles. Mode 7, overhead stages. And a boss that would burst out of a wall and introduce himself to you. Love this game and it will hold up forever.

Shortly after I got my Nintendo Action Set, many years ago, I played a game called Double Dragon in the arcade. It. Was. Amazing. What was even more amazing was that Double Dragon was coming to the very console I had just received!

Months and months went by. I begged my parents. I made deals with my parents. Please. Please. Please. I must have this game! And then, one frosty Christmas morning, I opened the last present under the tree, and there it was! I probably will never top the  level of excitement I had over this game.

Although, not totally faithful to the original arcade version, I fell in love with the NES version, and still play it regularly today.

So, where does Machine Gun Willy come into all of this? There were three bosses, during the NES era, that always made my palms sweat. They made or broke my chances for completing that NES game at that moment. They were: Mecha Dragon (Mega Man 2), Mike Tyson (Mike Tyson’s Punch Out) and Machine Gun Willy (Double Dragon).

Machine Gun Willy was the last fight before your battle with Jimmy Lee (*spoilers*)–the final boss of the game. Willy came packing heat with his machine gun that never seemed to run out of ammo. From across the screen this guy would just fire away–endlessly.

Let’s pause for a moment. Imagine this: You’ve made it to Mission 4. You’ve somehow survive the ridiculous blocks that jut out of walls and do massive damage if one hits you. Jumped your way over an entire section of platforming. And  fought a near-endless gauntlet of every enemy you had faced thus far in the game. And now it’s time for this machine gun-toting maniac to pop out and light you up. Your life bar is hanging by a thread. You walk over for a kick. He ducks. You kick again. He ducks again. Then he swings his gun at you…. And well….

….You die.  You start over at the first fight in the gauntlet (two Abobos), and run through all those enemies once again. And here comes Willy, no pants, and a machine gun.

And, you died again. What can you do? As far as I know, there’s no pattern to his attacks. And his attacks do a lot of damage. The best thing to do is to get in close, try to kick, elbow, headbutt, and/or throw him as quickly as you can. Do not keep a lot of space between you and him. Although, you can jump over his bullets, he will keep firing and eventually hit you. Move fast and stay calm. 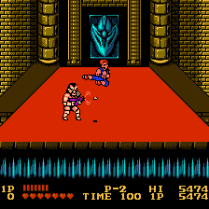 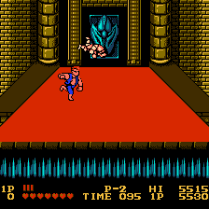 To this day, Willy is one of my all-time favorite bosses. Even though it appeared he was only wearing gloves and boots (cough), his iconic machine gun and difficulty made him almost frightening to me as a young OroichiFett. It was a thrill, though, when I knocked him down for the last time, and he blinked away, and the final boss stepped out…. It was one hell of a feeling. Trust me.

Until I write again.